I found out about Jay Lake’s passing last night before bed, which is a terrible time to hear such devastating news. Not enough time to really process things, and I was angry. Even though I’d known this was coming, for a long time now, it still hit me hard, and I was pissed off once again about the unfairness of the world.

Waking up this morning after tossing and turning all night, I was heartened to read the great tributes on Facebook from people who knew him, as well as the remembrances at io9 and Tor.com.

I don’t remember the first time I met Jay. He was a force of nature in the speculative fiction crowd for years before we actually shook hands. But when we did, it was like seeing an old friend again after a long absence, as though we were buddies in a previous life. He was generous and welcoming right away, even though I was still a nobody, and I was struck by how incredibly full of life he was.

I was there at WisCon for the infamous three-way pool noodle fight between Jay, Tim Pratt and David D. Levine to determine the winner of the Campbell Award that year, and laughing so hard I couldn’t breathe. David was master of the noodle, but Jay ended up winning the award, and was effusively gracious in his acceptance speech.

At another WisCon (or maybe it was the same one, I can’t remember now), a big group of us went to lunch on the streets of Madison one day, and happened upon a pub that was open. As we were chatting, someone on the other side of the pub lit up a cigarette. Upon seeing my wrinkled-up nose and sour expression (even though the guy was across the room and I couldn’t really smell it), Jay asked what was wrong. I pointed at the smoker, then Jay laughed and patted me on the back and said, “Jason, we’re in a bar. What did you expect?” I had a rebuttal all ready to go about the smell destroying the taste of my food, and second-hand smoke, and reasons, but then immediately realized that he was right and I had to get over myself.

Jay was phenomenally prolific, which initially shamed me, but then inspired me to increase my rate of output. He forwent a lot of the media consumption that I was (and still am) involved with (I don’t think he even owned a TV), and took his writing career extremely seriously. For a while there, he was writing a story a week, and they were wonderful, beautifully rendered works of prose.

I was privileged to share a table of contents with him in Intracities (edited by Michael Jasper) and Text:UR—The New Book of Masks (edited by Forrest Aguirre), and to be able to publish his writing in A Field Guide to Surreal Botany. He came very close to buying a few of my stories for the groundbreaking Polyphony anthology series (which, along with Lady Churchill’s Rosebud Wristlet and the Leviathan anthologies, helped to shape speculative fiction of the last decade), and his rejections were always filled with encouragement. 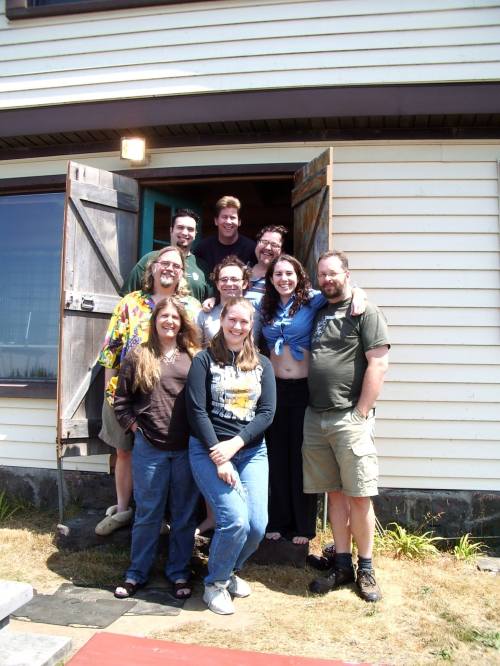 I had the very good fortune to attend the Strange Horizons Oregon Workshop in 2004, run by Jay and Mary Anne Mohanraj. I learned an incredible amount, and got to experience some wonderful camaraderie with other writers at similar points in their careers. Above is the group photo of us that Mary Anne took, with Jay in one of his trademark brilliantly colored shirts with a big grin on his face. This is how I choose to remember him now.

The way he approached his cancer, knowing from the outset that it was terminal, was incredibly brave. He documented every step in the process on his blog, and when his health worsened and he was too weak to do so, his partner Lisa updated in his stead. He faced death with integrity to the very end.

Jay was an incredibly kind and generous person, and my life is better for having known him.