POP AYE in Theatres (But Not For Long) 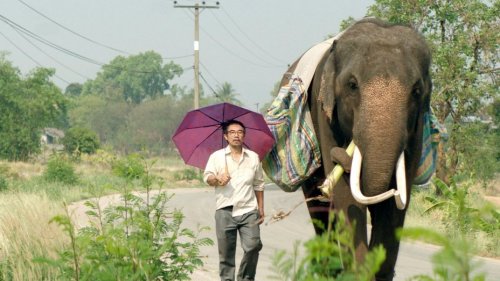 POP AYE, the first feature film by Singaporean auteur Kirsten Tan, is out now in theatres in Singapore for what will likely be a limited run. It has already won a Special Jury Prize in the World Cinema Dramatic Competition section at the 2017 Sundance Film Festival, and the VPRO Big Screen Award at the International Film Festival Rotterdam in the Netherlands. It’s gotten a lot of international attention; the Hollywood Reporter called it “an assured and noteworthy feature debut”.

POP AYE is a road movie with an elephant set in Thailand. It tells the story of Thana, a disenchanted architect, who bumps into Popeye, his long-lost childhood elephant, on the streets of Bangkok. Dissatisfied with his current life in the city, Thana takes his elephant on a road trip across Thailand, in search of the rural farm where they grew up together.

Along the way, they meet a host of characters—a fortune-telling vagabond, a pokerfaced policeman, a crematorium monk, a lonely transsexual karaoke singer—who colour their journey, as various mishaps (sometimes absurd, sometimes poignant, sometimes both absurd and poignant at once) befall them on the road.

I saw the film on opening night last Thursday, and it blew me away. Tan’s voice as an independent filmmaker is assured and empathetic, and she coaxed incredible performances from her cast of non-professional actors (including one very expressive elephant). She did a Q&A for the night, and the discussion about her writing and development process was fascinating; it took her three years of just working on the script before filming a single scene, and she worked incredibly closely with several Thai translators to make sure that the dialogue worked in both English and Thai.

Because this is an indie film, it won’t stay in theatres here for very long, but attendance right now can help to prolog the run. If you’re in Singapore, it’s playing right now at Golden Village cinemas at Plaza Singapura and VivoCity, but I recommend seeing it at The Projector (Singapore’s only art-house theatre) if you can.