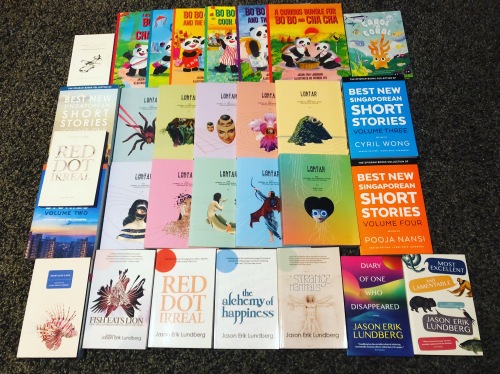 So tomorrow is the last day of the decade, and I’ve been thinking about how much has changed for me in the last ten years. As you can see in the photo above, I published a hell of a lot of books: seven picture books, five anthologies, ten issues of a literary journal, one chapbook, four fiction collections, and a novella. I must once again thank Kenny Leck at Math Paper Press, Keith Brooke at Infinity Plus Books, and Edmund Wee at Epigram Books for believing in these titles enough to bring them out into the world to play nice with readers. The first of these was Red Dot Irreal in 2011, the little collection that could, and a book that I’m still very proud of.

I left my teaching job at the end of 2011, and started as Epigram Books’ first and only fiction editor in September 2012. Since then I have edited more than 50 books, many of which went on to appear on year’s best lists and win accolades of the Singapore Literature Prize and Singapore Book Awards. I’ve now been at the company for a little over seven years, and it has been the most fulfilling job of my adult working life.

I started getting invited to festivals this decade, which was a nice validation of my writing and editing capabilities. I appeared at the Singapore Writers Festival (2012-2019), George Town Literary Festival (2016, 2017, 2019), Singapore International Festival of Arts (2018), Asian Festival of Children’s Content (2016), AWP Conference & Bookfair (2015), Singapore Literature Festival in NYC (2014), Singapore International Translation Symposium (2014), and All In! Young Writers Media Festival (2013). The fact that I continue to get asked about my opinion on a variety of issues is a good indication that I’m doing something right.

After my marriage broke down, I went through a painful and protracted divorce, which was both emotionally traumatic and financially depleting, and also resulted in having to sell my previous flat co-owned with my ex-wife and buy a new flat on my own. All of this contributed to the most stress I have ever felt in my life, and there are days still that it weighs on my mind; I recently watched the Noah Baumbach film Marriage Story, and it dredged up a lot of the pain and sadness I felt during this period. But not only did I get through it, I now have a civil and respectful relationship with my ex, and have lived in a home that feels all my own for the past three years. Things are not exactly hunky dory, but they get better every day.

Most importantly, I grew as a parent and as a person while raising my daughter, Anya. She was born in October of 2009, so she did nearly all of her growing up this past decade, and I got to see her transform from an utterly dependent yet utterly adorable tiny human into an intelligent, funny, kind, creative, remarkable girl. I have been reminded again and again through my interactions with her what is truly important in life, and how to let the little things go. I’m a far more generous and thoughtful person because of simply being around her and enjoying the world through her eyes, and it’s my forever privilege to be her daddy.

The next decade is already off to a good start: my first novel (and 25th book), A Fickle and Restless Weapon, will be released in June 2020, and I’ll likely be starting up a Patreon sometime early in the year (I previously ran one for LONTAR, but this will be focused on my new novel-in-progress, One Nine Eight Six). I also have two books coming out through the Epigram Books UK imprint next year: Diary of One Who Disappeared and Best Singaporean Short Stories 1. I’ll also endeavour to be even kinder toward others and especially myself, to establish some habits to improve my health and well-being, to make more time for dating and other social situations, to remain open to new experiences, and to guide Anya through her pre-teen and teenage years with compassion and patience. I hope y’all will be along for the ride.